What a disappointment. Had been watching the numbers come up so we thought we would give it a go, and had high hopes of salmon for dinner. The Umatilla launch is only about 55 minutes from Walla Walla, so easy drive and we were on the water by 6:15. Fished 5 hours without a hit, and didn't even mark fish on the finder. Started out a bit below the dam and made a few passes in different lanes with different setups until well downstream of the highway bridge. Trolled up and down with no luck. Tried different pro troll colors and brads baits. Tried short bus and spinner combos also. Also ran some quickfish patterns for a while. Mostly seahawk type colors, some chartreuse, and silver thrown in. Also ran straight pink.
There were half a dozen or so other boats on the water all morning, and the two parties we spoke with in the lot at the end of the morning had the same experience, didn't even see a sign of fish activity. We all seemed to bail about the same time. Water 69.5. 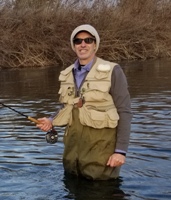 9/6/2019 6:45:44 PM
How was the milfoil below the dam ?? FYI: It was really bad below the reach - we were on the hook with three poles out
and as soon as I finished cleaning the 3rd one I'd have to start over again - the trollers, , about 1/2 doz boats, would have to stop
and spend about 10-12 minutes before heading back up river - tuff, especially without any reward - we only had one hit and that
was on a let down after cleaning. Current was low and slow - only using 2 oz with in line rotating flashers, one kwikfish and 2
superbaits. We were in 21-23 FOW. This info in lieu of a report = hope it's of some use to someone.

9/7/2019 9:17:50 AM
We only pulled the downrigger once for weeds, and fowled our gear maybe 3 times when our gear drug bottom (lots of clams and clear goo). I did pull up every 15min or so and many times cleaned a bit of weeds from my dropper leader when I freshened the wrap or stuffing.
Flow seemed slow below also. I've only been there 2 other times so I'm not that familiar, we always seem to go north to the Snake. We needed 6oz with the pro trolls and 4 with superbuss. That would put us 25-30' deep, near bottom, with 40-60 feet of line out.

9/7/2019 10:54:22 AM
Thanks again - really would like to drive down there sometime next week for a try - there's plenty of fish coming up the
ladder at Bonneville, but they're sure slow getting beyond and over John Day. I know there are nets and other tribs for
them to go up, but I've been following the #'s closely over the dams for over 10 yrs and at the end of each season
I can always figure that whatever goes up over Bonneville 45% go over McNary. Always liked the phrase in the carribbean
Islands, "soon come mon, soon come" Will watch the counts and when it hits over 2,000 at John Day, I'll be there
the next day.

9/8/2019 9:36:16 AM
Yes, another old guy trying to teach his grandsons - knew him from years past up in the "northwoods", he fished out of
dutch harbor until he got too old for that, so he came back home to the Yakima area. We've had several conversations
about the proliferation of the nets above Bonneville and their effect on the up river run - he won't argue the point, but
will not hesitate to tell all that if it wasn't for BPA,, State hatcheries and our indigenous neighbors, there wouldn't be any
salmon at all - I grudgingly give a little on that point, but then I'm kind of an opinionated old fart too.